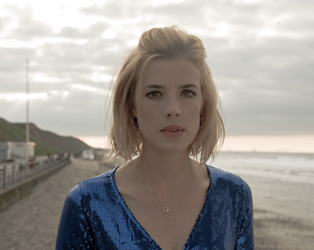 Celebrating the release of Electricity, the new film from director Bryn Higgins opening Friday, December 12th, exclusively at the IFI, we have a signed film poster and an Electricity book, courtesy of our friends at Soda Pictures to give away to one lucky winner! Lily O’Connor is a determined and sharp-witted northerner working at an amusement arcade in an English seaside town. In the wake of a family tragedy, she travels to London in search of her brother, who has been missing for years having disappeared in mysterious circumstances. Her mission leads Lily to skirt the capital’s dark underworld, while she has the complication of having to manage her epilepsy, a condition that makes her quest even more treacherous.

Adapted from a novel by Ray Robinson, Electricity is a refreshingly ambitious British film and a great achievement for its lead actor and its director in particular. Model Agyness Deyn carries the film with an assured confidence that’s revelatory from someone who has had such rare acting experience previously, while filmmaker Bryn Higgins employs inventive, daring visual tricks to convey the disconcerting effect of Lily’s illness.

Agyness Deyn is also known for her career in which industry?

Competition closes at 5pm on Friday, December 12th, 2014. The winners will be contacted by email shortly after. (See IFI Terms and Conditions regarding prizes and competitions.)