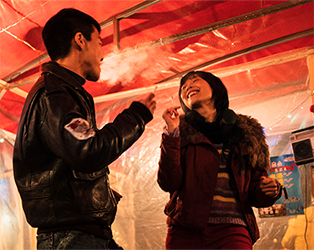 July 27th 2020: Following its cancellation due to the Covid-19 outbreak in March, the fourth edition of the East Asia Film Festival Ireland (EAFFI) goes online at IFI@Home this week. Cinema from East Asia has never been more popular, in the wake of Parasite‘s historic success at the Oscars earlier this year. This year’s festival, which runs from Thursday, July 30th to Tuesday, August 4th, includes new films from acclaimed filmmakers Jia Zhang-ke (Ash Is Purest White), Kôji Fukada (Harmonium) and Hong Khaou (Lilting).

Commenting on this year’s programme, the festival’s Artistic and Programming Director Marie-Pierre Richard said, ‘In the extraordinary circumstances in which we find ourselves, we are thrilled to be able to present the fourth edition of the East Asia Film Festival Ireland. Brought to you via the new IFI@Home platform, we still have a way to celebrate and experience arthouse cinema. While we greatly miss the opportunity to share this experience with you in the cinema, we can continue to bring innovative, diverse, independent and inspiring films from East Asia together with rich and exclusive contributions from filmmakers including Fukada, Khaou, and Zhang-ke.’

The festival opens with Fukada’s latest, A Girl Missing, the story of a careworker who becomes embroiled in the case of a missing girl; featuring a wonderful central performance from Mariko Tsutsui, the film premiered at last year’s Toronto International Film Festival.

Hong Khaou’s English-Vietnamese Monsoon, starring Henry Golding of Crazy Rich Asians fame, sees a man return to Ho Chi Minh City for the first time since he was six years old. There, romance sparks when he meets an American fashion designer whose father fought in the Vietnam War. Touching drama Heavy Craving, from director Hsieh Pei-Ju, centres on the burgeoning friendship between an overweight school cook, a young deliveryman, and a cross-dressing school student.

Jia Zhang-ke’s documentary Swimming Out Till The Sea Turns Blue, which premiered at this year’s Berlin Film Festival, sees the award-winning filmmaker chronicle a multi-generational roster of the country’s most esteemed writers as they attend a literature festival in Shanxi, China; in its Berlinale review, the Hollywood Reporter called the film ‘quiet, dignified and ruminative’.

From Wang Xiaoshuai, the director of one of 2019’s most acclaimed films, So Long, My Son, comes Chinese Portrait, a wholly unique photographic portrait of modern China. Through long shots without subtitles or voiceover, we encounter traditional villages, crumbling factories, commuters, and factory workers in immense spaces. Liang Ming’s Wisdom Tooth, meanwhile, is a complex drama which centres on the lives of a brother and sister whose livelihoods are upended by an environmental disaster.