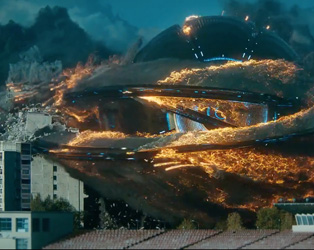 A Russian sci-fi blockbuster made on a comparatively meagre budget, Fedor Bondarchuk’s Attraction – a phenomenal domestic boxoffice success – is an eye-grabbing contemporary riff on the alien invasion movie.

The bravura opening sequence is especially memorable as the Russian military intercepts an enormous spacecraft cloaked in a meteor shower; shooting it down over Moscow, its spectacular crash-landing is depicted through an impressive display of special effects. Surprising shifts of tone follow in a film that upends our expectations of how this familiar scenario will play out.