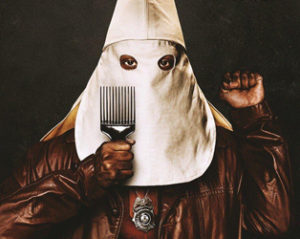 A special preview of the film, followed a satellite Q&A with Spike Lee, will take place on Monday 20th at 18.30. The film opens on August 24th.

Spike Lee’s new film inserts polemic borne of anger and outrage at the division of America along racial lines into his most accessible and straightforwardly entertaining film in some time.

Based on a true story, it recounts the successful infiltration of the Ku Klux Klan in 1979 by Ron Stallworth (John David Washington), the first African-American police officer and detective in the Colorado Springs Police Department, aided by colleagues including Flip Zimmerman (Adam Driver). Biting and hard-hitting in its references to the contemporary situation, it’s also very funny as Lee proves his mastery of tone.