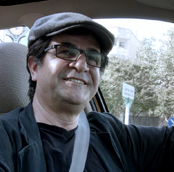 We are pleased to announce the winner of the annual Pete Walsh Critical Writing award for 2016 is Naomi Keenan O’Shea for her excellent review of Jafar Panahi’s 2015 film Taxi. The film was screened at the IFI throughout October of last year and proved a hit with audiences. You can read Naomi’s review here.

The Pete Walsh Critical Writing Award is given annually to an outstanding piece of critical writing on any one film theatrically screened in Ireland during the previous calendar year (in this case 2015). The focus is on film appreciation and criticism rather than academic analysis and the winner received a year’s free entry to films at the IFI.