Once the brightest teacher at his high school, Martin (Mads Mikkelsen) has fallen into a seemingly permanent slump; he’s barely present in his classes – the students and their parents even attempt an intervention – and his marriage is slowly unravelling. Martin’s trio of similarly disaffected teacher friends happen upon a Norwegian academic’s theory that we are all born with a deficit of alcohol in our systems, and that modest inebriation opens the mind, enhancing creativity and confidence in the workplace. Intrigued, they embark on an experiment to maintain a constant level of intoxication; if Churchill won WWII in an alcoholic daze, who knows what a daily dose might do for them? Vinterberg, in his first collaboration with the effortlessly charismatic Mikkelsen since 2012’s The Hunt, avoids sermonising in a highly entertaining film that nimbly celebrates the pleasurable side effects of alcohol without ignoring the dangers of excess.

The screening on June 20th includes a pre-recorded Q&A with the filmmakers and actors of Another Round after the film at 19.50. 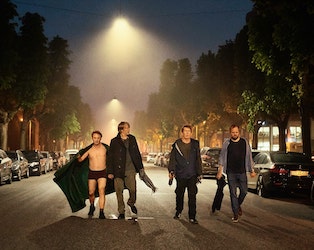