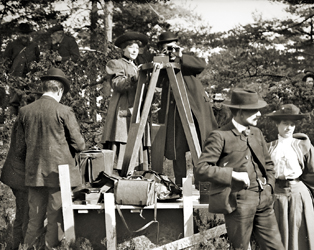 We are delighted to celebrate the remarkable, pioneering work of filmmaker Alice Guy-Blaché (1873-1968) with the documentary portrait Be Natural: The Untold Story of Alice Guy-Blaché by Pamela B. Green, and a selection of six short films directed by Guy-Blaché from the Gaumont Pathé Archives which will be peppered throughout the festival before main features. Alice Guy-Blaché, aka ‘Mademoiselle Alice’ was one of the most prolific filmmakers of early cinema, with a career in France and the USA spanning 1896-1920, and a staggering output of more than 1,000 films. For her, cinema was a process of exploration and discovery, open to all styles, formats and genres. She directed dramas, westerns and slapstick comedies (before Chaplin or Keaton!); and numerous action films with female heroes. She asked her actors to ‘be natural’, eliciting performances that transformed the art of screen acting. She captured this through close-ups, and an emphasis on body movement and facial expression. Guy-Blaché’s films were often shot on location, accomplishing sophisticated scenes and radical stunts, while later she even built her own studios. A true pioneer, Mademoiselle Alice wrote, produced and directed many of her films – ‘auteur cinema’ 70 years before the New Wave.

BE NATURAL: THE UNTOLD STORY OF ALICE GUY-BLACHÉ – Sunday 24th: 14.00
This insightful documentary follows Alice’s rise, from Gaumont secretary to her appointment as Head of Production, and her illustrious 20-year career in France and the US, founding her own studio, and writing, directing and producing more than 1,000 films. Narrated by Jodie Foster, the film is a journey through her work and an insight into family, friends and colleagues. Green gains access to archives, with rare footage of televised and audio interviews, aired here for the first time. Contributors include Patty Jenkins, Diablo Cody, Ben Kingsley, Geena Davis, Ava DuVernay, Michel Hazanavicius, and Julie Delpy.

SHORT FILMS DIRECTED BY ALICE GUY-BLACHÉ
This selection of short films have been restored by Gaumont, and will be screened before some of the new features in the main programme. This season is organised with the support of Gaumont Pathé Archives (Paris) with special thanks to Agnès Bertola.

THE BIRTH, THE LIFE AND THE DEATH OF CHRIST
Her most notable film from the Gaumont period, this 30-minute extravaganza features 25 sets, numerous exterior locations and over 300 extras.
1906 • 35 mins • B&W • Digital
This will be screened before Carwash on Friday Nov 22nd at 16.10.

THE CONSEQUENCES OF FEMINISM
A society in which gender roles are switched.
1906 • 7 mins • B&W • Digital

MADAME’S CRAVINGS
A light gender-based comedy with an unusual subject for the time – the cravings women get while pregnant.
1906 • 4 mins • B&W • Digital