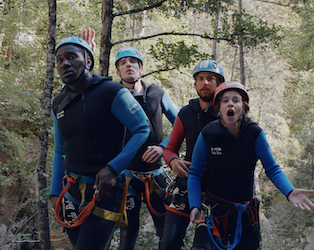 A summer’s night along Paris’s quays, and people are dancing. 20-something Félix (Eric Nantchouang) and Alma (Asma Messaoudene) meet, and wake together next morning in a park. Alma says goodbye and runs to catch a train to meet her family in the south of France. Félix, smitten and desperate to see Alma again, convinces pal Chérif (Salif Cissé) to accompany him to Valence, in the hopes of finding her. They leave Paris courtesy of a car share with reluctant driver Edouard (Edouard Sulpice). Director Guillaume Brac has made a magical film, full of Rohmer-esque comedy. Both a sensitive chronicle and delicate portrait of today’s youth, his fresh cast of new faces fills us with romance and friendship while tempers fray and arguments erupt.