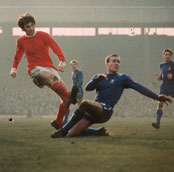 IFI International in Manchester: MUTV interview with Matthew Nolan, curator of ‘Football As Never Before’

Manchester United’s television channel (MUTV) interviewed Matthew Nolan, project curator of Football As Never Before (Fussball wie noch nie), during a presentation of the film by IFI International at HOME Manchester on November 22nd. The film’s director Hellmuth Costard, along with seven cameramen, filmed a football match in Old Trafford in September 1970 with George Best as the sole focus offering multiple perspectives and creating a personal portrait of the player.

As the tenth anniversary of George Best’s passing approached, Nolan became involved in the project to honour his legacy. The film provides audiences an opportunity to engage in a visual cinematic experiment that reflects on Best, his sporting prowess, and his space in popular culture at the height of his popularity.

The screening was supported by Culture Ireland and the Geothe Institut.

You can watch the interview here.

Football as Never Before was also shown in the IFI as part of its ‘From the Vaults’ strand.