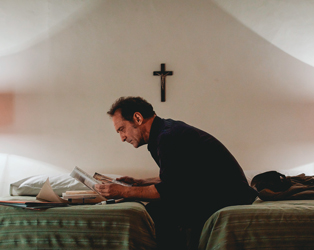 This film was released 20th July 2018, and is no longer screening.

Returning home to France from a traumatic assignment in the Middle East which cost him the life of his close friend, and almost his hearing, war reporter Jacques (Vincent Lindon) is given little time to recover before he is approached by a French cardinal at the Vatican who invites him to Rome under mysterious circumstances. In the Vatican archives, Jacques is told that an 18-year-old girl named Anna (Galatéa Bellugi) claims to have seen an apparition of the Virgin Mary outside her village in Southern France. Tasked with investigating the veracity of her claims, Jacques finds the town in the grip of religious hysteria where local priest Father Borrodine (Patrick d’Assumçao) is exploiting Anna’s newfound celebrity.

Director Giannoli wisely keeps the focus on Jacques relationship with Anna, his concern for her safety increasing as he delves into her troubled past.