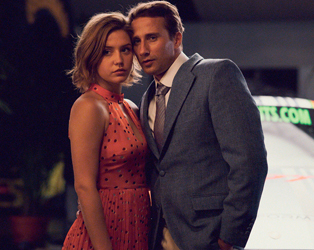 This film was released 13th July 2018, and is no longer screening.

Gigi (Matthias Schoenaerts) is part of a notorious Brussels gang responsible for a series of expertly executed, high stakes robberies. Under the cover of his luxury automobile business, he meets glamorous and skilled driver Bibi (Adèle Exarchopoulos, Blue is the Warmest Colour). Despite their wildly different backgrounds – Bibi is from a respected family – they immediately connect and fall rapidly in love.

Gigi must try to shield the increasingly suspicious Bibi from the reality of his criminal activities as, behind the scenes, he prepares for another elaborate heist. Benefitting immeasurably from the undeniable chemistry between its leads, Racer and the Jailbird is a fast-paced and unabashedly sexy romantic thriller from director Michaël R. Roskam (Bullhead, The Drop), and written by the screenwriting team of Thomas Bidegain and Noé Debré (Dheepan).