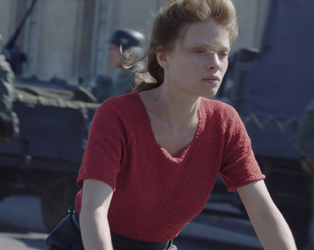 Marguerite Duras’s harrowing experience of World War II, as recounted in her autobiographical novel La Douleur, published to acclaim in 1985, forms the basis of Emmanuel Finkiel’s sombre evocation of grief and suffering.

The setting is 1944 in the final weeks of the German occupation of France. Marguerite (a brilliantly internalised performance by Mélanie Thierry) endures an agonising wait for news of her husband, Robert Antelme, who has been arrested and sent to Dachau concentration camp for his involvement in the resistance. She embarks on a dangerous, covert relationship with Nazi collaborator Rabier (Benoît Magimel) in order to gain information about her deported husband’s whereabouts. In the aftermath of the liberation of Paris, with no news of her husband’s fate, Marguerite is forced to confront the inevitable.