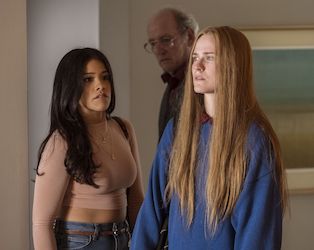 It’s difficult to imagine a more dysfunctional family unit than the one depicted in Kajillionaire, Miranda July’s (Me and You and Everyone we Know, The Future) decidedly off-kilter new comedy-drama. Those familiar with July’s singular brand of deadpan eccentricity will not be disappointed by this latest work, but what elevates Kajillionaire is the director’s new-found sense of warmth and empathy for her oddball characters, and the mannered tone is softened by moments of genuine insight into family dynamics, intimacy, and the lack thereof. Petty crooks Theresa (Debra Winger) and Robert (Richard Jenkins) have raised their only daughter, the bizarrely monikered Old Dolio (Evan Rachel Wood), to swindle, scam and steal at every opportunity. Old Dolio’s sheltered life is upended by the arrival of Melanie (Gina Rodriguez), a mall employee who wants in on their cons, endearing herself to Old Dolio’s parents, and challenging her position in the family.