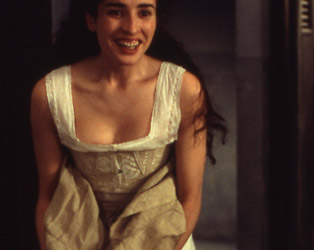 As with her earlier feature Anne Devlin (1994), Pat Murphy again reclaims an important Irish woman from relative obscurity as she tells the tale of Nora (Susan Lynch), a spirited young housemaid from Galway, and her relationship with raffish young writer, James Joyce (Ewan MacGregor). The story unfolds through breathtaking cinematic tableaux following the couple from Dublin to Trieste, Italy, chronicling their passionate and tempestuous life together. Joyce is tormented by the fear that his work will never be published and increasingly obsessed with suspicions of Nora’s infidelity, but the couple’s relationship is bonded by a deep, sexual love and by Nora’s practical wisdom and common sense.