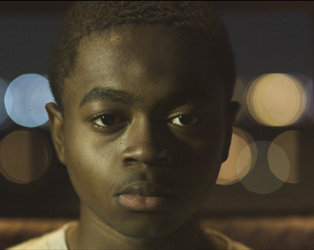 This film was released on Friday 21st April 2017 and is no longer screening.

Michael O’Shea’s low-key, absorbing film centres on teenage loner and orphan Milo (Eric Ruffin), a usually taciturn boy who only becomes animated when discussing a topic with which he is seemingly obsessed – vampirism. His encyclopaedic knowledge of related lore has led him to identify with the subject to an extent that includes the drinking of human blood.

When Sophie (Chloe Levine) moves into his apartment building, rather than sharing in the general perception of Milo as someone to avoid, she is drawn to his quiet self assurance, and a bond is formed that distracts Milo from his former concerns as a plan to solve all of his and Sophie’s problems in one sweeping move takes shape. While strongly influenced by films such as George Romero’s Martin (1978), The Transfiguration also functions as a subtle and tender examination of the coping mechanisms employed during grief.