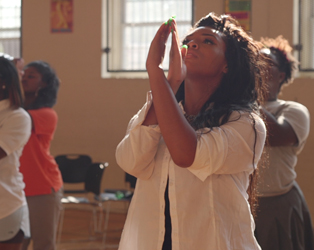 Made soon after the death of Freddy Gray in police custody in April 2015 led to a wave of protests across Baltimore city, Amanda Lipitz’s deeply affecting documentary follows students of the city’s Leadership School for Young Women over the course of their graduating year.

While undergoing the stress of preparing applications for college, the girls let off steam by giving their all in ‘The Lethal Ladies’, the school’s impressive step dance team which has been lined up to take part in a state competition with contestants from Maryland, Virginia and Washington, D.C.

By focusing primarily on three very different students – the talented but under-confident Blessin Giraldo, scholarship candidate Cori Grainger and straight-talker Tayla Solomon (who is forever embarrassed by her ever-present and highly entertaining mother) – the film offers a complex and engaging portrayal of a deeply sympathetic, supportive and inspiring community.