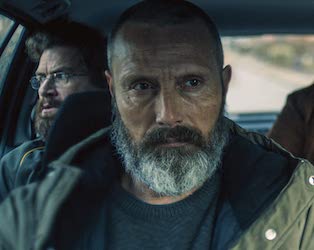 The latest jet-black comedy from Danish absurdist Anders Thomas Jensen (Men & Chicken) begins with a stolen bicycle, a seemingly random occurrence that escalates into outlandish conspiracy theory and gangland bloodshed. Jensen regular Mads Mikkelsen plays Markus, a military vet who is called home from duty when his wife, Emma, is killed, and his daughter traumatised by a horrific railway accident. Markus meets Otto (Nikolaj Lie Kaas), a witness to the crash and statistics expert, who becomes convinced that a notorious biker gang called ‘The Riders of Justice’ have orchestrated the train derailment through a complicated series of deliberate events, beginning with the stolen bike. Jensen expertly handles the shifts in tone the material presents, creating a high-wire act that functions as both an exciting thriller, and a risqué black comedy, whilst juggling weighty themes such as bereavement, PTSD, and the role of chance in determining the shape of our lives.