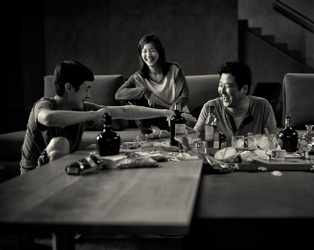 A special Black and White version of the four-time Oscar winner; this special transfer was overseen by director Bong Joon Ho and offers the lustrous contrasts of monochrome.

Inveterate grafter Kim Ki-taek (Song Kang-ho) and his family are penniless and unemployed. Cramped into a tiny, bug-infested semi-basement apartment in a dilapidated neighbourhood, they subsist on a meagre stipend earned by folding pizza boxes. Opportunity knocks when his teenage son Ki-woo (Choi Woo-shik) is hired to be the private English tutor for Da-hye, the daughter of Mr Park, a wealthy corporate CEO who lives in a vast, gleaming modernist house with his somewhat distracted wife and spoiled son. Winner of the Palme d’Or at the Cannes Film Festival and four Oscars (including a historic Best Picture win), Parasite confounds expectations, beginning as a knockabout farce before delving into much darker territory. An excoriating, pitch-black comedy that lays bare the inequalities of Southern Korean society with a gleeful sense of mischief.