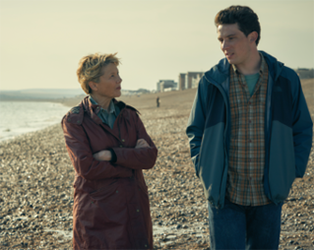 Grace (Annette Bening) and Edward (Bill Nighy) live in a seaside town in Sussex near a cove under cliffs known as Hope Gap. Married for twenty-nine years, their relationship appears to be one of companionship and comforting routine. During a visit from their London-Based son Jamie (Josh O’Connor), Edward informs them both that he plans to leave Grace and walk out the door that very same day. Communication between the couple has dried up, with Grace nagging Edward for his lack of enthusiasm for life, and Edward, who feels inadequate, responding by harbouring secrets. With the family thrown into disarray, Grace must find a way through this change in her, and with the help of her son, achieve some measure of hope. Written and directed by William Nicholson and brought to life by an exceptional cast, Hope Gap explores the emotional unravelling of a family unit.