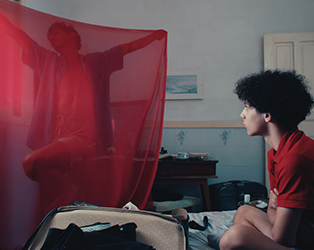 ‘I called to say I love you. To thank you for your love…’

The early days of AIDS brought such losses that a true cultural reckoning of those times has been hard to come by – not least because so many of the best storytellers were among the fallen.

Russell T. Davies’s It’s A Sin brought the pandemic back into public consciousness, and Rodrigo de Oliveira’s The First Fallen goes deeper with unflinching directorial imagination, resulting in a narrative full of rage and beauty as three friends prepare to face a new and awful inevitability.

Among the many special things about the film is a rare centring of trans experience in an AIDS narrative, for which Renata Carvalho’s portrayal of Rose establishes an unforgettable voice. Johnny Massaro’s Suzano is tender-hearted and courageous and reminds us of so many lost and eternally young.

It would mean nothing to celebrate 30 years of LGBTQ+ cinema without time and space for a reflection on HIV and AIDS. On Thursday we also screen Irish hybrid-documentary work How To Tell A Secret to bring the conversation on HIV right up to date.

A trans man recuperating from top surgery sees a painting in his hotel bathroom which transports him back to a different time.