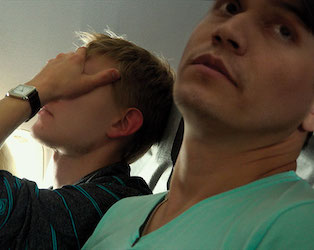 To pre-order Welcome to Chechnya, click here. The film will be available to view from Saturday, October 3rd at 16.00.

In 2017, Russian opposition newspaper Novaya Gazeta reported on cases of gay men being rounded up and tortured in Chechnya. The reports went so far as to call them concentration camps. What emerged caused shock and disgust on an international level. Moscow denied the claims. Ramzam Kadyrov, Chechnya’s strongman leader said that there were no LGBT people in the region, because even if there were, their families would have already killed them.

Welcome to Chechnya is an astonishing documentary, featuring guerilla filmmaking of the highest order. Following escapees from Chechnya, and the tireless and life-threatening work of LGBT activists in Moscow and St Petersburg, the film gives a human face to the invisible people risking their lives to fight for their very right to exist. It demonstrates that, although we have achieved hard-won rights in many countries, to simply be an LGBT person in many parts of the world remains a death-defying act. Welcome to Chechnya is urgent and necessary viewing, and a masterpiece of documentary cinema.