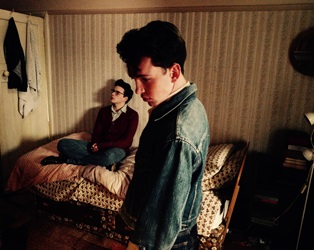 ‘Life is too short’ says Anji (Katherine Pearce) to Steven Patrick Morrissey (Jack Lowden), ‘for clichés’, he retorts drolly, advice the makers of this film have wisely chosen to heed. The Morrissey of England is Mine is not the gladioli-wielding, defiantly miserable voice of a generation whose image would come to adorn the bedroom walls of misunderstood 1980s teenagers, but an earlier iteration where his defining traits exist in nascent form.

It’s 1976. Steven lives at home with his mum, earning a meagre wage at the Inland Revenue while posting withering band reviews to NME. Arch, prickly, yet painfully shy, he dreams of a life beyond the gloomy pall of rainy Manchester, taking what solace he can in the city’s underground art and music scene. Subtle and witty, England is Mine serves as an origin story for a popular icon.