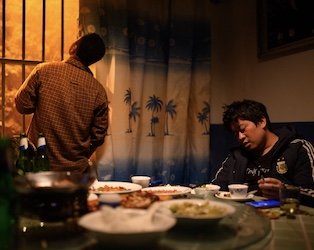 Wei Shujun’s enthralling second feature follows a film crew on location in the remote town of Yong’an in southern China to prepare for a shoot. Ripples of Life divides into three chapters revolving around our four protagonists. In the first part, a new mother and waitress who works in her in-law’s local restaurant catering for the film production; the second part revolves around the lead, a famous actress returning to her hometown for the first time since her youth; while the third talkative part focuses on both screenwriter and director as they ruminate on the act of filmmaking.

Working with a mix of professional and non-professional actors, this is dynamic, smooth humoured, satirical social commentary. Filled with poignant moments and observation on both cosmopolitan and rural people, it is also a reflection on the meaning and process of art versus commerce and the pursuit of authenticity in cinema.

The screening will be introduced by Tianxiang WANG.

Tianxiang WANG is currently a PhD student at Huston School of Film and Digital Media, National University of Ireland, Galway. His research focuses on urban space in contemporary Chinese cinema. He earned a Bachelor’s degree in the Department of Literature, Beijing Film Academy in 2015. After graduation, he worked for three years as a practitioner and screenwriter in the film and television industry in China.