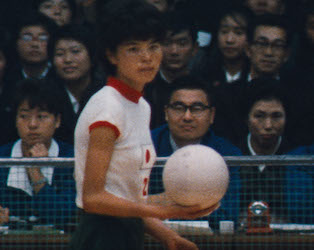 In present day Kyoto, we join former players of the Nichibo Kaizuka textile factory female volleyball team at a lunch reunion. The team, the ‘Typhoon from the Orient’, created in November 1953, became known as the ‘Witches of the Orient’. Training six days a week, 51 weeks per year, through dedication, discipline, and harsh training, they were driven by coach Daimatsu (‘Daimatsu-The demon’) to win at any cost. They became the best female volleyball team in the world, with an 258 consecutive victories up until 1966.

To a backdrop of electronic/pop music (some original score by American musician Jason Lytle), Faraut’s documentary plays tricks on us, spinning the image like the players keeping the ball in play. He interpolates this with stunning archive footage of training sessions and factory work, slow-motion ellipses, flickering polarised and black and white images, negative inversions, and manga-style visuals.