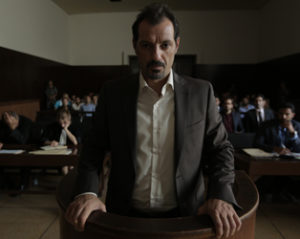 A minor altercation escalates into a dispute that comes to encapsulate the lasting legacy of the Lebanese Civil War in Ziad Doueiri’s incendiary drama, a recent Oscar nominee for Best Foreign Language Film. While renovating the façade of a building in Beirut, Tony (Adel Karam), a Lebanese Christian and Yasser (Kamel El Basha), a Palestinian refugee and now a construction foreman, get into a squabble over a broken drainpipe. Harsh words are exchanged and insults thrown, and soon the two men are locked in a lengthy courtroom battle that becomes a lightning rod for political groups and the media.

This screening is part of the Dublin Arabic Film Festival 2018.