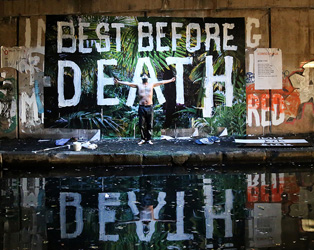 In 1992, Bill Drummond’s enormously successful pop group The KLF ceased activities. Since 2014, he’s been on a world tour visiting Kolkata, North Carolina and elsewhere. In each place he carries out his self-imposed ‘work’ – building beds, baking cakes, making soup, shining shoes – to the amused, perplexed or annoyed reactions of onlookers. He estimates his life expectancy is 74, and his world tour will end when he’s 73. He’s not rich, his actions can’t be monetised, and he has been ignored by the art world.

So what’s it all for? Director Paul Duane, ever fascinated by the cultural maverick (John Healy, Bernard Natan, Jerry McGill), features his most idiosyncratic and charismatic subject to date. Filmed by Oscar nominee Robbie Ryan and directed with appropriate dollops of whimsy, this is as entertaining a documentary profile as you could wish for.