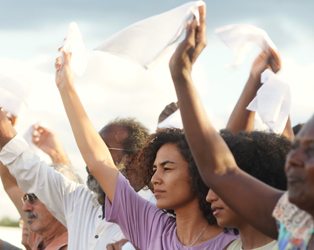 This film opens on March 13th.

Teresa (Bárbara Colen) returns to the village of Bacurau in the northeast of Brazil for her grandmother’s funeral. The tiny rural community is under siege from the local government who have cut off the water supply and erased the town from digital maps, but a more immediate threat comes from a cadre of heavily-armed international assassins, most of them Americans, led by the psychotic Michael (Udo Kier), who appear to be killing for sport. As the hunters approach, the villagers prepare for a bloody conflict. What begins in the vein of an anthropological docudrama, with a loose structure and a large ensemble cast, gradually morphs into a thrilling hybrid of western and war movies, with escalating tension exploding into violent confrontations. The depiction of a powerless underclass rebelling against their oppressors is a pointed commentary on contemporary Brazil’s political climate.