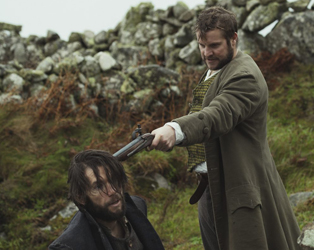 On the eve of the great famine, fisherman Colmán Sharkey (Dónall Ó Healaí) ekes out a meagre existence for his family on the west coast of Ireland. Wrongly blamed for the murder of an inclement local landlord (Michael McElhatton) he is forced to go on the run, hiding out in a cave on a remote rocky island where he grieves for his wife and child who have now perished in his absence. Wasting away he sinks into deep despair until his encounter with a sickly young girl (Saise Ní Chuinn) gives him a reason to live. Life is tough but tolerable until the unscrupulous murderer, now bounty hunter, reappears.

Striking cinematography, by Kate McCullough (The Farthest), of stark western locations and visceral central performances conjure the unimaginable horrors of famine in a narrative that reveals the injustices of the prevailing regime – “This didn’t happen to us. It was done to us”.