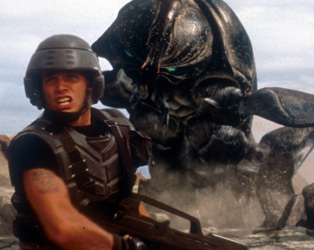 A critical and commercial misfire on initial release, Paul Verhoeven’s playfully self-aware intergalactic war movie has grown in stature over the years and is now rightly viewed as a biting satirical critique of US right-wing jingoism, militarism and interventionist foreign policies that somehow managed to smuggle Nazi iconography into an ostensibly mainstream sci-fi entertainment.

The setting is the 23rd century when mankind is at war with an insectoid species; the film charts the military career of young hotshot Johnny Rico (Casper Van Dien) as he rises through the ranks from naive infantryman to decorated officer in the brutal war against the giant bugs.