The screening will be followed by a Q&A with Tomi Reichenthal and Gerry Gregg.

On the eve of the 75th anniversary of the Liberation of Bergen-Belsen Concentration Camp by British troops on April 15th 1945 we present Close to Evil, one of a trilogy of films about Tomi Reichenthal, Irish Holocaust survivor. An RTÉ Radio interview on Holocaust Memorial Day 2012 sent Tomi Reichental on a journey in search of Hilde Lisiewicz, one of his jailers at Bergen Belsen. He learned that she was alive and well and living in Hamburg, a convicted War Criminal who claimed she was “a victim of victor’s justice”. Tomi embarked on a quest across Europe to investigate her claims of innocence.

His mission was not one of vengeance but one of enlightenment, gathering history to ensure that those who were lost would never be forgotten. He now works tirelessly to promote tolerance and to educate young people about the importance of remembrance and reconciliation. 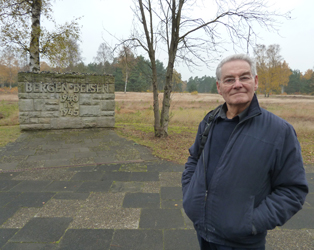