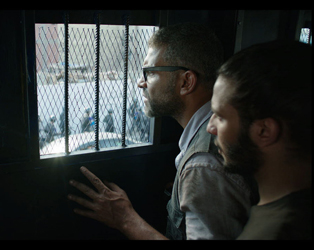 This film was released on Friday 21st April 2017 and is no longer screening.

Egypt 2013, President Morsi has been toppled; as riots break out, a disparate group of dissidents and journalists are rounded up and bundled into the back of a police van in director Mohamed Diab’s bracing political allegory, the opening film of the IFI’s 2016 Dublin Arabic Film Festival.

With great economy, Diab restricts the action to the interior of the truck where warring parties of all factions have been thrown together as civil war erupts around them – it’s revolutionaries against Islamic fundamentalists and both against the army. Diab brings real cinematic flair to the claustrophobic scenario, aided in no small way by his script, co-written by Khaled Diab, which delineates the complexities of multiple characters and their motivations in lucid fashion.