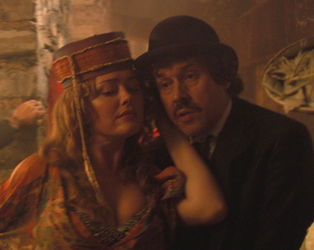 In a bold move, director Sean Walsh breaks up the order of Joyce’s narrative, rearranging events – such as Molly’s famous closing soliloquy – to create a more accessible narrative than that of the novel. Characters have breakfast, attend a funeral and discuss literature, with Bloom and Stephen’s paths slowly converging as the film builds to a surrealist climax. For all his bold deviations from his source, director Sean Walsh holds firm to Joyce’s celebration of the ordinary, with earthy sexuality central in this playful and creative retelling.

This screening will be introduced by director Sean Walsh.