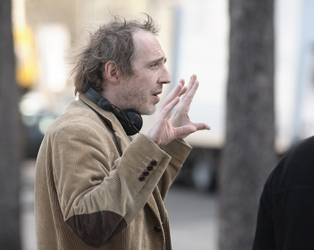 Arnaud Desplechin can be regarded as a truly visionary filmmaker. His cinema is warm and generous, at times volatile, burlesque and audacious.

Desplechin was born at Roubaix in the North of France in 1960. He studied at the IDHEC French film school, gaining a cult reputation right from the start with his medium length debut The Life of the Dead (1991). In a recent interview, when asked the primary concern of his films, Desplechin answered ‘The dizziness of identity.’

Desplechin’s films are deeply human, emotional, obsessional. Tragedy and comedy combine, revolving around a few characters and focussing on family dynamics – between parent and child or amongst friends or couples. His characters of Greek (Junon), Joycean (Nora, Paul Dedalus), and biblical names (Ismaël, Abel, Elias), are emotionally volatile, melancholic – a mixture of strengths and weaknesses. They often seem to react disproportionately as they reappraise themselves, striving to break free from their inner kingdoms where they are trapped, before eventually finding themselves, and some greater insight or acceptance is gained. Resolution brings sympathy from the viewer towards them.

Desplechin’s unusual relationship with the actors reveals a new generation headed by Emmanuelle Devos and Mathieu Amalric – often his alter ego on the screen. (MPR)

We are delighted and honoured that Arnaud Desplechin will be attending the Festival.

His earlier work – My Sex Life… Or How I Got Into an Argument, Esther Kahn and The Sentinel – will screen at the IFI as part of the general November programme from November 10th to 18th.

The IFI would like to thank at Why Not Productions: Thomas Rosso and Rosa Attab; at Wild Bunch: Elodie Sobczak and Esther Devos; and at L’Institut français; Christine Houard.