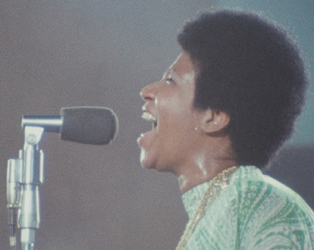 This film was released on Friday 10th May 2019 and is no longer screening.

In 1972, at the height of her popularity, Aretha Franklin chose to revisit gospel, the music of her youth. The resulting album, Amazing Grace, recorded with a live band and a choir over two days in the New Temple Missionary Baptist church in Los Angeles, was one of the singer’s biggest hits and remains the best-selling gospel album of all time. A documentary record of the session was filmed under the auspices of director Sydney Pollack, who had just released They Shoot Horses, Don’t They? and Jeremiah Johnson. However, a recording glitch rendered his footage useless. Franklin’s recent death has permitted the revelatory film, digitally restored by Alan Elliott in 2007, to be released.

Eschewing the tropes of a documentary, Amazing Grace is a raw testament to a remarkable talent.