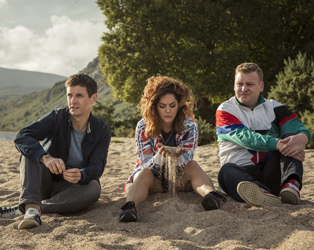 JUNE AT THE IFI

Read on for a full run down of our events at the IFI for June 2018 – we’re showing The Sound of Music in 70mm!

23RD SAT – 15.30 | KILLER COUPLES: THE HONEYMOON KILLERS
This is one of the great American crime movies featuring Tony Lo Bianco as a swindler who uses the lonely hearts columns to prey on women by promising love and marriage. He meets his true match in Shirley Stoler, and the two go on a crime spree inspired by the real life ‘Lonely Heart Killers’ of the 1940s. Presented on 35mm.

24TH SUN – 11.00 | IFI FAMILY: SWALLOWS AND AMAZONS
With school nearly out, it’s time to get ready for great holiday adventures on land and sea. A perfect place to start is with this adaptation of Arthur Ransome’s classic children’s book. Tickets: €4.80 per person, €14.40 for a family.

24TH SUN – 13.00 | MYSTERY MATINEE
The ultimate Surprise Film returns to the IFI for June. It could be any film from the entire history of cinema – one release last week or a century before – and we won’t give you a single clue. The best part, tickets are just €5!

24TH SUN – 15.30 | KILLER COUPLES: NATURAL BORN KILLERS
Arguably the most infamous of films featuring killer couples, and one of the most controversial films ever made, Oliver Stone’s social and cultural satire has grown in power in the years since its release. This tour de force stars Woody Harrelson and Juliette Lewis as celebrity killers on a rampage across America, and is probably more relevant now than ever before. Presented on 35mm.

25th MON – 18.30 | IRISH FOCUS: A WOMAN’S PLACE + Q&A
To celebrate one hundred years of women’s suffrage, artist Noel Murphy embarked on a six-month journey to paint the 53 sitting women members of the Houses of the Oireachtas in one single portrait. This screening will include a panel discussion moderated by Eamonn Mallie, with artist Noel Murphy, director Declan McGrath and members of the Houses of the Oireachtas who sat for the portrait.

26TH TUES – 18.20 | ANDREW KOTTING: LEK AND THE DOGS
The true story of Ivan Mishukov, a four-year-old Russian boy who ran away from his home in Moscow in the mid-1990s to live for two years on the streets in the company of feral dogs, formed the basis of Hattie Naylor’s award-winning play, Ivan and the Dogs. This screening will be followed by a Q&A with director Andrew Kötting.

27th WED – 11.00 | WILD STRAWBERRIES: VICEROY’S HOUSE
The director of Bhaji on the Beach and Bend it Like Beckham offers a cinematic interpretation of the 1947 transfer of power from Britain to India, through the experiences of the last Viceroy, Lord Mountbatten (Hugh Bonneville) and his liberal wife Edwina (Gillian Anderson). Over 55s only, tickets €4.25 including regular tea or coffee.

27TH WED – 18.20 | THE BIGGER PICTURE: JAWS
Steven Spielberg created the summer blockbuster with his 1975 feature, and it remains a killer thriller with top notch performances and a truly tense finale. The screening will be introduced by Sinéad Gleeson, writer, editor, broadcaster and journalist.

27TH WED – 18.30 | FEAST YOUR EYES: THE HAPPY PRINCE
Get your ticket and a main course for €20 and see Rupert Everett’s directorial debut. The menu on the night will include a choice of Baked Haddock with a potato and beetroot salad, or Green pea, asparagus, mint and goats cheese risotto.

28TH THURS – 18.20 | OPEN CAPTIONED SCREENING: THE HAPPY PRINCE
Oscar Wilde’s final years are the subject of Rupert Everett’s heartfelt debut as director, the actor ably essaying the role of the once-celebrated writer who now lives in destitution in Paris. Presented with Open Captioned subtitles for the hearing impaired.

28TH THURS – 18.30 |KILLER COUPLES: GUN CRAZY
John Dall is a young man who is fascinated by guns, later meeting and marrying carnival sharpshooter Annie Laurie Starr (the late Irish actress Peggy Cummins) who inculcates him in a life of crime including an incredibly realised bank heist.

29TH FRI – 11.00 | WILD STRAWBERRIES: VICEROY’S HOUSE
The director of Bhaji on the Beach and Bend it Like Beckham offers a cinematic interpretation of the 1947 transfer of power from Britain to India, through the experiences of the last Viceroy, Lord Mountbatten (Hugh Bonneville) and his liberal wife Edwina (Gillian Anderson). Over 55s only, tickets €4.25 including regular tea or coffee.

30TH SAT – 18.20 | KILLER COUPLES: HEAVENLY CREATURES
Famed New Zealand director Peter Jackson made the transition from early splatter fests to this fantastical drama based on real events. Kate Winslet and Melanie Lynskey make their screen debuts as Kiwi teens who concoct their own fantasy world, and don’t take kindly to anyone who tries to shake them out of it.