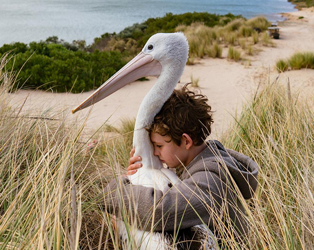 June 18th 2019: The Irish Film Institute is delighted to announce the 2019 IFI Family Festival, which this year runs from Friday, July 26th to Sunday, July 28th. As always, this year’s festival will include a fantastic mix of new and varied feature films from across the globe, fantastic shorts and a very special comedy event. Two of this year’s films, opening film Miniscule – Mandibles from Far Away from France and closing film Storm Boy from Australia, have a particular emphasis on conservation and biodiversity.

The festival opens on Friday 26th with a tropically-themed launch event featuring RTÉjr’s Clara Murray, before the screening of Hélène Giraud and Thomas Szabo’s animated treat Miniscule – Mandibles from Far Away. This dazzling adventure centres on a ladybird who discovers his young son is missing in a tract of Guadeloupean rainforest marked for felling. The rescue squad hatch an elaborate plan to rescue junior and save the rainforest too.

Speaking about this year’s festival, IFI Head of Education, Alicia McGivern, commented, “2019 been the year that young people have found their protest voices and demonstrate their environmental concerns, so we’ve tried to reflect this in our festival choices. Whether it’s a young girl fighting to go to school or insects defending their tropical domain, these international films will hopefully get young audiences shouting from the rooftops.”

Saturday 27th sees the return of the festival’s perennially popular shorts programmes – Short Tales 1 at 11.00 features a mostly dialogue-free selection of thrilling animated and live-action shorts suitable for children ages 4+, while the Sh0rt Tales 2 at 13.00 will allow attendees aged 8+ to peek at life in the Colombian rainforest, and share a girl’s passion for space exploration.

Also screening on Saturday are Indian drama Chuskit, which focuses on a young girl determined to attend school despite her disability and the local traditions, and Sune vs Sune, a sweet Swedish coming-of-age tale about a boy who has to fight to reclaim his friends’ affections when a charming newcomer, who shares his name, arrives for the new school year.

On Sunday morning, the focus switches to comedy with a Peek Zoo Special for younger viewers. Based on the popular children’s books by Kevin Waldron, this event for ages 4+ will feature some of the most popular episodes from the TV show, along with a chance to meet the actors who provide the voices for the programme’s characters. For children aged 8+, comedian Erin McGathy will bring the funny before a screening of hilarious stop-motion comedy A Town Called Panic.

Sunday afternoon has a long-distance flavour with Japanese anime Okko’s Inn featuring a young girl who goes to live at her grandmother’s country inn. Struggling with the traditions and rural way of life, Okko finds that there are friendly ghosts present that only she can see. Children will be able to get a taste of the Far East in the IFI foyer with a display of Japanese culture in association with the Embassy of Japan in Ireland and Experience Japan.

This year’s closing film is the unforgettable Australian adventure Storm Boy. Businessman Mr Kingsley recounts his childhood experience of befriending an orphaned pelican near his isolated home. Forging a remarkable bond with the bird he called Mr Percival, as a boy he learns the importance of land, conservation and nature from local Aboriginal man Fingerbone Bill. Didgeridoos, boomerangs and Aboriginal art, on display courtesy of the Australian Embassy Ireland, will help bring the film to life!

Films for under 9s in the programme that contain subtitles will have those read aloud.

Tickets for the 2019 IFI Family Festival are now on sale. Individual tickets for all films cost €5.50, including the opening night event. A family ticket per film (valid for both feature films and shorts programmes) costs €16.50 for 2 adults and 2 children, or 1 adult and 3 children.

Highlights of the festival will show at GLÓR, Ennis, from September 6th to 8th.