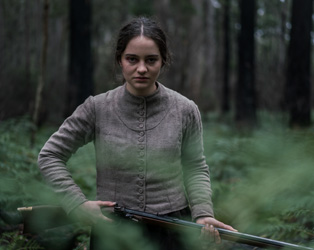 REVIEW ROUNDUP: THE NIGHTINGALE, THE TWO POPES, SHOOTING THE MAFIA

Three new releases arrive at the Irish Film Institute on Friday, November 29th 2019: Shooting the Mafia, The Two Popes and The Nightingale.

“The violence and racism are truly shocking, but there are also moments of astounding natural beauty, and unexpected tenderness. Your own understanding of strength and fragility is questioned throughout.”
4.5/5 – RTÉ

“It takes a bold and brave storyteller to begin these difficult and complex but urgent conversations.”
4/5 – Guardian

“The punishment is the point. This is a difficult movie because the questions it raises are not easy.”
New York Times

“In Jennifer Kent’s pulverizing revenge tale, Aisling Franciosi delivers a tour de force as an Australian woman determined to put a stake through the heart of toxic masculinity. You won’t know what hit you.”
4/5 – Rolling Stone

THE TWO POPES
“We shall risk the mortal sin of hyperbole by suggesting that these two experienced actors have never been better.”
4/5 – Irish Times

“This entertaining odd-couple bromance, about two men in the running to be the Catholic pope, hits the heights when it just lets its leads, Anthony Hopkins and Jonathan Pryce, lob dialogue back and forth like two tennis greats.”
4/5 – Time Out

“A subtle and engaging double portrait that touches on complicated matters of faith, ambition and moral responsibility.”
New York Times

“The Two Popes is an exuberant Vatican-set buddy movie that attempts to lift the lid on the inner workings of the Holy See.”
5/5 – Times

“The delicate dance between the two veteran actors, both eagerly devouring a late-life jewel of a script, is a joy to behold.”
Screen International

“As an extraordinary piece of writing – and an even more impressive showcase for its actors – it eloquently communicates the importance of giving people something to believe in.”
Variety

“Anchored by two outstanding performances from Anthony Hopkins and Jonathan Pryce, the film is a triumph of writing as well as unostentatious filmmaking.”
Hollywood Reporter

SHOOTING THE MAFIA
“Director Kim Longinotto and Westport-based producer Niamh Fagan’s film is unflinching and it crackles with anger but it also finds great reservoirs of humanity among these deeply personal stories of loss and pain.”
4/5 – RTÉ

“This candid and passionate documentary portrait, directed by Kim Longinotto, shows that Battaglia has always lived at the turbulent crossroads of history.”
New Yorker

“In its many uses of multimedia, Shooting the Mafia explores the possibilities of art as a tool for challenging violence.”
Film Ireland