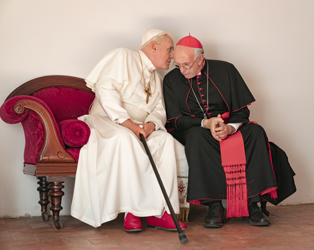 This film was released on Friday 29th  November 2019 and is no longer screening.

The Vatican is being rocked by a series of child sex abuse scandals among the clergy, and Ratzinger, an ultra-conservative traditionalist, is about to resign, becoming the first pontiff to do so in more than six centuries. Belatedly recognising that change is necessary if the church is to survive and evolve, he summons the progressive, forward-thinking Bergoglio to his summer retreat for a private audience.