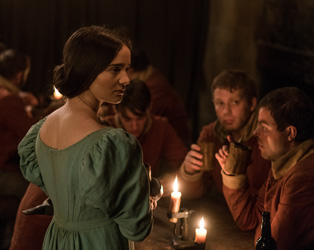 This film was released on Friday 29th  November 2019 and is no longer screening.

Jennifer Kent’s follow-up to 2014’s The Babadook takes place in 1825 in the unforgiving terrain of penal colony Van Diemen’s Land.

Clare (Aisling Franciosi), a young mother, and her husband work in the service of British officer Lieutenant Hawkins (Sam Claflin), who is being assessed for promotion. His frustration at the slow progression of his career, entirely through his own faults, is taken out on Clare in brutal fashion. When he and his closest cronies murder her family and leave her for dead, Clare sets out for revenge. Her guide, from whom she at first hides her true intentions, is Billy (Baykali Ganambarr), an Aborigine who has reasons of his own to hate the British.

A multi-layered indictment of misogyny, racism and colonialism, this is an undeniably harrowing film featuring a towering performance from Franciosi.