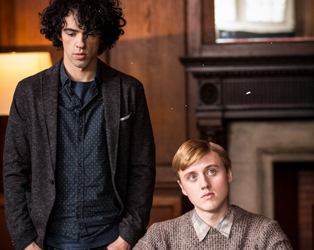 Review Roundup: The Drummer and the Keeper, The Work, Insyriated, Belle De Jour

It’s a bumper week at the IFI, with four new titles on release – well technically three brand new films and a classic re-release.

Irish comedy The Drummer and the Keeper arrives fresh from an award win at the Galway Film Fleadh, from first time director Nick Kelly. We also have an Irish exclusive release of The Work, a new documentary about intense group therapy sessions in Folsom State Prison in California.

Insyriated is also out from Friday September 16th, a gripping tale of a small group of people trapped in an apartment in Damascus. Finally, we’re delighted to bring back Belle De Jour to the big screen in a new 4K restoration starring the incomparable Catherine Deneuve.

Read on for some reviews of these films, and do pop in to make up your own mind.

THE DRUMMER AND THE KEEPER
“A sweet-but-sharp story of two young men who, in the words of the movie’s Lego-speak, each have the piece that the other is missing”
4/5 – RTE

“While not perfect, this film is a charmer that will introduce great Irish talent to a wider audience”
Entertainment.ie

“This warm, thoughtful and insightful film marks Kelly as one to watch”
Hot Press

“This is an impressive, moving and often funny debut feature that deserves to find a wide audience”
Film Ireland

“Kelly’s frank and open treatment of taboo issues does much to advance that cause, and will be appreciated by the many whose lives have been strained in similar circumstances. It’s a strong debut for him and both of his actors, marking them all out as talents to watch in the future”
Screen Daily

“Insyriated is a powerful piece of theatre-cinema. Just bring your knowledge of the real war to scatter for seasoning and specificity”
Financial Times

“A chilling, fast-moving study of a Syrian household under siege”
Hollywood Reporter

THE WORK
“Never mind SFX and explosions: these emotional pyrotechnics make for the most sensorial experience you can have in a cinema this year”
4/5 – Irish Times

“Say what you will about prison’s capacity to reform, but this documentary makes clear that in its own special way, the “work” is working”
Variety

“A compelling emotional display, one that captures masculinity at its most innocent and leads to profound displays of compassion”
Roger Ebert.com

“Not to sound trite, but it’s a damn privilege to watch this movie”
5/5 – Little White Lies