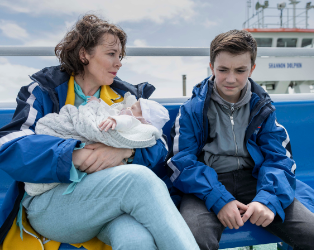 This week’s new titles at the Irish Film Institute from Friday, July 29th 2022 include Fire of Love, Hit the Road, Joyride and Paris, Texas.  Read on for a selection of reviews or pop in to make up your own mind!

“Hands down, the documentary of the year” –  Rolling Stone

“Fire of Love is a surprise; a dazzling, seductive, nature-meets-romance documentary” – Vogue

“The most enchanting American nonfiction offering at the 2022 Sundance Film Festival, director Sara Dosa’s Fire Of Love is a one-of-a-kind story” – The AV Club

“Their story makes for this year’s best documentary to date, and a film that demands to be seen on the largest possible screen.” 4/5 – The Irish Times

“Dosa’s film is a slick, moving and cutely Herzogian portrait of this loving, monomaniacal couple who straddled the line between the eccentric and the earnest.” – Little White Lies

“Dosa’s Fire of Love is one of those rare documentaries that arrives once or twice a decade to leave audiences awe-struck by its wonder and terrors.” 5/5 – The Upcoming

“One of the year’s most electric pictures.” 4/5 –  The Financial Times

“The film’s tender emotional core is its greatest asset, which is enhanced by inventive tonal shifts and complemented by incredibly fleshed-out characters, a uniformly brilliant cast and naturalistic dialogue that keeps it from lurching into the terrain of sterile realism” –  Little White Lies

‘ “Hit the Road” Is the Quiet, Low-Key Masterpiece of the Year” – Rolling Stone

“A filmmaker that both honors his father’s ongoing legacy, and inaugurates his unique, very own voice” 4/4 – Roger Ebert

“What makes ‘Hit the Road’ so memorable and devastating is the way it explores normal life under duress.” – The New York Times

“Joyride is a treat and audiences will relate to every tender second, every element of whimsical synergy, and every symbiotic piece of intercommunication. It is just wonderful to watch.” – Film Ireland

“Colman and Reid work beautifully together” – The Newstatesman

“After almost 40 years, Wim Wenders’s Euro-Americanist masterpiece Paris, Texas feels as richly mysterious and mesmeric as ever” 5/5 – The Guardian

“The movie lacks any of the gimmicks used to pump up emotion and add story interest, because it doesn’t need them: It is fascinated by the sadness of its own truth” 4/4 – Roger Ebert

GOOD LUCK TO YOU, LEO GRANDE

“Thompson has always been a terrific actor, but she reaches a new plane here, a place where her vulnerability as a person and her confidence as a performer mesh into something glorious.” – Time

“Emma Thompson and Daryl McCormack’s chemistry is intense and each give brilliant performances.” –  IGN