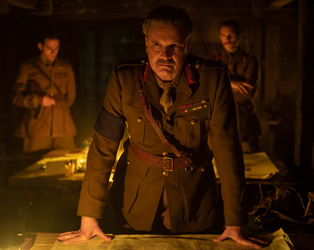 1917
“The result is a slice of prestige British film-making that nimbly avoids accusations of heritage cosiness. Distinguished actors turn up in smallish parts throughout – Andrew Scott, Colin Firth, Benedict Cumberbatch – but each has a worthwhile contribution to make.”
4/5 – Irish Times

“Sam Mendes’s 1917 is an amazingly audacious film; as exciting as a heist movie, disturbing as a sci-fi nightmare.”
5/5 – Guardian

“With every passing minute 1917 strengthens its case for inclusion alongside Paths of Glory, The Big Red One, Platoon or any genre great you choose to mention.”
5/5 – RTÉ

“In one of the best war films of all time, director Sam Mendes brilliantly delivers a story of two WWI soldiers on a mission that’s a stunning technical accomplishment that unfurls as one single take – and a deeply felt tale of heroism under fire.”
4.5/5 – Rolling Stone

“This is a protean display of virtuoso filmmaking, one that film aesthetes will wallow in but that even ordinary audiences will note and appreciate.”
Hollywood Reporter

“Astonishing as his filmmaking can be at times, it’s Mendes’ attention to character, more than the technique, that makes “1917” one of 2019’s most impressive cinematic achievements.”
Variety

UNCUT GEMS
“It takes great discipline to deliver indiscipline on this scale. Josh and Benny Safdie dipped toes in New York’s pinballing underground with the compulsive Good Time, but Uncut Gems marks a notable escalation of hostilities. It is to the earlier film as Ulysses was to A Portrait of the Artist as a Young Man.”
5/5 – Irish Times

“It’s a cinema of pure energy and grungy voltage, and the Safdies make it look very easy. This will be the year’s most exciting film. You can take that to the bank.”
5/5 – Guardian

“Directed with relentless tension and diamond-hard intelligence by Josh and Benny Safdie, “Uncut Gems” is a thriller and a character study, a tragedy and a blast.”
LA Times

“As a Manhattan jeweler and gambling addict caught in a vise of his own making, Adam Sandler proves he can act with the best of them, meeting every challenge the incendiary Safde brothers throw at him to give the audience the ride of its life.”
4.5/5 – Rolling Stone

“A jangling panic attack of a movie and a timely reminder that, when he puts his mind to it, Adam Sandler can be one of the finest actors currently working.”
Screen International

“Classic Safdie characters are brash, volatile-as are Sandler’s. Here, juiced up with an awful mustache and a personal style befitting his awful merchandise, he unleashes untold reserves of mania and panic.”
Vanity Fair

“Uncut Gems feels like being locked inside the pinwheeling brain of a lunatic for more than two hours – and guess what: It’s a gas!”
Variety

“Uncut Gems emerges as real gem itself, a sparkling comedy-drama about a compulsive gambler and risk-taker who never knows when to quit.”
Hollywood Reporter