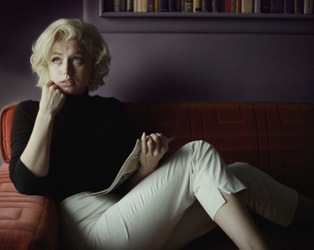 This week’s new titles at the Irish Film Institute from Friday, 23rd September  2022 include After Yang, Blonde, Moonage Daydream and Silent Land. Read on for a selection of reviews or pop in to make up your own mind!

“Colin Farrell Is Superb In Sci-Fi Stunner After Yang.” – Headstuff

“The surfaces, the design, the lighting, and the movements of the characters are, indeed, beautiful—Kogonada has an eye, a sensibility—but, in “After Yang,” he calls attention to his own inclinations, rendering his own sense of beauty self-consciously seductive and potentially suspect, and making the film’s viewers complicit in the oppressive power of such beauty.” – The New Yorker

“‘After Yang,’ with Colin Farrell, is a beautifully human glimpse of a posthuman world.” – The Los Angeles Times

“A gentle vision of the near future in which Colin Farrell thrives.” 4/5 – Independent

“Overall, this is a wonderful film, introspective and thoughtful in its examination of the human (or technological) condition, while also providing solid and gripping drama.” 5/5 – The Upcoming

“After Yang is as beautiful technically as it is thematically, making this a must-see.” 5/5 – Stardust Magazine

“After Yang is a moving, subtle and grounded work of science fiction that doesn’t necessarily get to the core of its myriad issues, but certainly hits the heart.” 4/5 – Cinevue

“A high-quality example of domestic sci-fi in the style and tone of independent cinema as a future family comes to terms with the failure of their android helper.” 4/5 – The Reviews Hub

“If easier to recommend as a drama about loss than a sci-fi film about the future of technology, After Yang splits the difference with originality and insight, offering up a full-hearted, often incredibly moving character study with a piercing genre gloss” 4/5 – Flickering Myth

“Marilyn Monroe biopic is a difficult but rewarding watch.” 4/5 – The Times

“There are a lot of great songs, and thanks to Morgen’s dexterous editing, Bowie himself seems to provide the narration, a ghostly effect (he died in 2016) that resonates with some of his ideas about time, consciousness and the universe. He is not so much the subject of the film as its animating spirit.” – The New York Times

“Like David Bowie himself, it is larger-than-life in the best way possible.” – Collider

“Back in May, Moonage Daydream – the hypnotic, experimental documentary abstraction that encapsulates David Bowie’s life, art, and philosophy – blew the top off of an already buzzing Cannes Film Festival.” – The Film Stage

“‘Moonage Daydream’ is an immersive trip.” 4/5 – Book and Film Globe

“Brett Morgen’s Moonage Daydream isn’t a traditional documentary, but it has the momentum of a great song.” – The Irish Times

“An assault on the senses in the best possible sense, Brett Morgen’s skilfully assembled documentary uses archive footage and voice-overs from the man himself to tell David Bowie’s remarkable story.” 4 Stars – Independent.ie

“A dazzling kaleidoscope of music, fashion and philosophy.” 4/5 – The Irish Examiner

“Part portrait of a relationship rotting from the inside out, part abstract exploration of the refugee crisis, it’s a discomfiting film that uses its luxurious Italian holiday setting to queasy effect.” 4/5 – The Scotsman

“Woszczyńska is unflinching in her examination of the haute bourgeoisie’s indifference to the lives of the proletariat and the marginalised.” – Little White Lies

“Silent Land is compellingly cold, focusing on a fascinating relationship that touches upon a number of familiar themes but in a unique way.” 8/10 – Film Carnage

“A frostily assured feature debut from Aga Woszczyńska, this measured, chillingly airless relationship drama chips away at the veneer of privilege of a seemingly perfect couple.” – Screen Daily

“Director McLeod — another of Lee’s fellow students — has fun with contradictory accounts, tall tales and faulty memories in a film that pulls the rug just as effectively as its subject and inscrutable star do” 4/5 – The Irish Times

“A riveting rollercoaster of a documentary” 4/5 – The Times

“Here is a documentary for anyone who’s ever suffered from impostor syndrome or ever fantasised about going back in time to their school days, to reverse all those heartbreaks and humiliations. In other words: all of us” 4/5 – The Guardian

“My Old School is a documentary exploring a true story that would have to be true as it’s too preposterous – it is absolutely nuts – for any screenwriter to have made it up.” – The Spectator

“The film as a whole leaves us with a different impression, one more sympathetic toward Brandon, despite individual attitudes about him” – AV Club

“The varied narrative devices and surreptitious construction to preserve the secret for as long as possible deliver an engaging film that will be best enjoyed if one restrains from searching the plot twist online before watching.” – Los Angeles Times