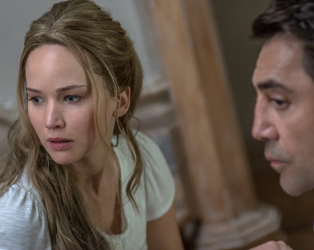 Review Roundup – mother! and The Villainess

mother! stars Jennifer Lawrence as a young woman who is in the middle of a large scale remodel of the home she shares with her husband, played by Javier Bardem. It’s probably best you don’t know any more, other than it is directed by Darren Aronofsky (Black Swan, Requiem for a Dream).

The Villainess is the latest film from director Jung Byung-gil (the blistering Confessions of a Murder) and focuses on an assassin with a mysterious past and an uncertain future. It’s also being hailed as one of the action films of the decade.

Read on for some reviews of these films, and pop into the IFI to make up your own mind!

“A sick joke, an urgent warning and a roar into the abyss, Mother! earns its exclamation mark three times over and more.”
5/5 – Telegraph

“Mother! always seems on the verge of exploding. Your head will feel the same way. And I mean that as a compliment”
Rolling Stone

“Darren Aronofsky’s allusive film certainly opens itself to a number of allegorical readings, but it also works as a straight-ahead head rush”
Indiewire

“As horror it is ridiculous, as comedy it is startling and hilarious, and as a machine for freaking you out it is a thing of wonder”
5/5 – Guardian

“Delightfully odd, deeply unsettling, and thoroughly engaging, mother! is one of the films of the year.”
5/5 – Entertainment.ie

“The whole thing is built from almost nothing but great shots, flabbergasting stunts and mad narrative curlicues, all working hand-in-hand to maximise audience delight”
4/5 – Telegraph