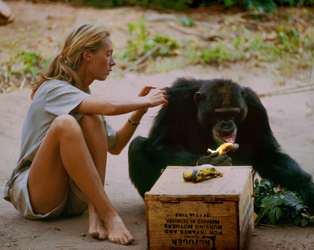 Review Roundup: Jane and In a Lonely Place

It’s Friday, and that means new releases at the IFI!

First up is Jane, a new documentary which has been mostly constructed out of footage shot in the 1960s and thought lost for decades. It follows Jane Goodall, the celebrated primatologist, on her first trip to Tanzania, accompanied by cameraman Hugo van Lawick. The luminous 16mm footage is accompanied by comments from the modern-day Goodall, in this striking portrait.

The re-release of In a Lonely Place brings one of Humphrey Bogart’s best roles back to the big screen. He’s a a washed up screenwriter called Dixon Steele, who gets into a spot of trouble when he’s suspected of murder. He hooks up with the resplendent Gloria Grahame for this dense, dark film noir from Nicholas Ray.

We’ll have daily screenings of both films from the 24th of November, and you’ll find a selection of reviews below.

JANE
“There are more than 40 documentaries about Goodall. What makes this one – directed by Brett Morgen, who made The Kid Stays in the Picture – essential, is Goodall’s reflective mood and the wondrous 16mm archive footage shot by Hugo van Lawick”
4/5 – Guardian

“Jane will delight those familiar with Ms. Goodall and provide a vibrant introduction for newcomers”
New York Times

“One of the best documentaries of the year so far”
4/4 – RoberEbert.com

“Jane isn’t just required viewing for fans of Goodall or animal lovers, but anyone seeking a classic in the making”
Indiewire

“The grayest, most morally ambiguous of film noirs — and arguably the most self-reflexive”
Village Voice

“Never were despair and solitude so romantically alluring”
Time Out