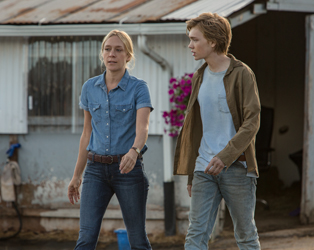 This film was released 4th May 2018, and is no longer screening.

The wide open spaces of the American mid-west offer a striking change of pace for director Andrew Haigh following the interior intimacies of his previous films Weekend (2011) and 45 Years (2015).

Adapted from the novel by Willy Vlautin, this latest film centres on Charley (Charlie Plummer), a lonely 15-year-old living under the thumb of an abusive father in a glum Portland suburb. Charley happens upon a racetrack one day and falls in with travelling horse trainers Del and his jockey partner Bonnie (played by Steve Buscemi and Chloë Sevigny), hitching a ride on their precarious tour of the small-time racing circuit. Charley grows attached to a failing racehorse named Lean on Pete, a bond that grows more urgent and poignant when he learns that Pete has become superfluous to Del’s requirements.