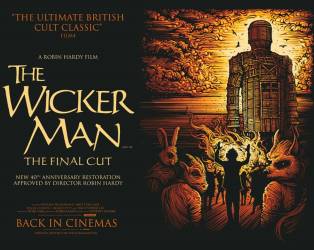 Win an amazing Prize Bundle & poster for ‘The Wicker Man’

A cult film in every sense of the word, Robin Hardy’s notoriously troubled The Wicker Man reaches its 40th anniversary with, for once, a genuine cause for celebration. Following an extensive global search, a rare copy of the original American release has been found, and restored, adding eight minutes to the film’s running time. It’s an opportunity to follow on the big screen the strange experiences of Sergeant Howie (Edward Woodward), a dourly devout Christian summoned to investigate the disappearance of a young girl on the island of Summerisle, where his beliefs are challenged and temptations proffered by the pagan community.

To celebrate the 40th anniversary of The Wicker Man, we have two great prize bundles to be won. Both bundles include a poster for the film and three DVDs – Don’t Look Now, Dracula Prince of Darkness and Cronos. To win one of these two fantastic prize bundles, just answer the following question before midnight this Thursday, 26th September 2013.

The Wicker Man runs at the IFI from Friday 27th September.

Q. What country is director Robin Hardy from?

Competition closes at midnight, Thursday, September 26th 2013. The winners will be contacted by email shortly after. (See IFI Terms and Conditions regarding prizes and competitions.)