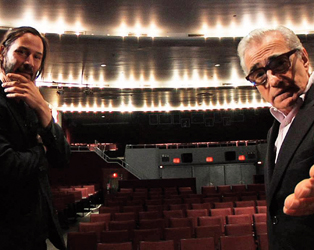 The IFI and SDGI are delighted to host the Irish premiere of Christopher Kenneally’s Side by Side as part of Digital Biscuit on January 24th at 8pm. The film, hosted and co-produced by Keanu Reeves, consults the best in the business in this smart documentary, as Martin Scorsese, David Fincher and Steven Soderbergh (to name a few) discuss the impact that digital filmmaking is having on the industry and where its future lies.

Following this screening there will be an online interactive Q&A with Kenneally and a discussion on the ‘The Digital Direction in Film’.

We are pleased to offer a pair of FREE tickets to this event on Thursday, January 24th to one lucky winner! Simply submit your details below before 2pm, Wednesday, January 23rd 2012.

Competition closes at 2pm, Wednesday January 23rd 2012. The winner will be chosen at random and notified by email shortly after. Tickets are non-transferable.