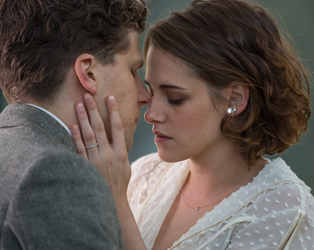 To celebrate the release of Woody Allen’s Cannes Film Festival sensation, Café Society, Warner Bros. Pictures have teamed up with the IFI to invite you to a special preview screening on August 29th at 18.30, at the IFI.

Bobby (Jesse Eisenberg) is a typically neurotic New Yorker who moves to Los Angeles to work for his uncle Phil (Steve Carell), a suave Hollywood agent to the stars. Complications arise when Phil assigns his PA (Kristen Stewart) to look after the nervous Bobby, whom he swiftly falls for, even though she is having an affair with a married man. Bathed in amber hues by the great cinematographer Vittorio Storaro, Café Society, with its gorgeously realised, if romanticised recreation of 1930s Hollywood glamour is that most unexpected of Woody Allen films, a love letter to LA, a city he has more often lampooned.

We have 20 pairs of tickets to give away to IFI Members and Friends for this preview of Woody Allen’s new romantic comedy Café Society!

*THIS DRAW HAS NOW CLOSED*