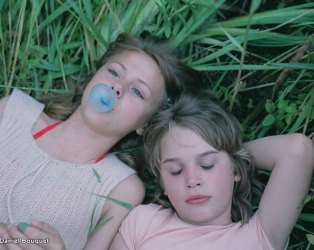 “First there was nothing, nothing at all.  Then there was a flame.”  Jojo a ten year old boy living with his father, one day discovers a jackdaw fallen from it’s nest.  When Jojo tries to put him back he falls again.  Jojo decides to bring him home.  Jojo’s fathers doesn’t like pets or plants and always says, “pets and plants belong outside.”  Jojo decides to hide his pet from his father.

Jojo is also part of the local waterpolo team, where he meets a girl called Yenthe.  Yenthe starts to like Jojo and also has a habit of blowing blue bubblegum

Kauwboy is a touching film about a boy and a bird.

Kauwboy is another film about a girl and a boy but this time with a jackdaw. At the beginning the boy has a race with his father to the bridge and the boy, Jojo, won.  Jojo goes into the field and he finds a baby Jackdaw. He brings him back to its nest in the tree in his t-shirt, but when he’s half way up the tree he drops the Jackdaw. Jojo tells the jackdaw that he’ll be safe with him at home.

His Dad is really aggressive. He punched Jojo in the eye and wacked him across the face. The Dad gets really mad when he finds out Jojo has a pet bird in the house because he says animals and plants belong outside.

The bird, when it stretches out, looks disgusting, but Jojo loves it. I thought the field looked really nice. It is a happy and sad film. I thought it was really good.

Kauwboy is a full length feature film with subtitles, set in the Netherlands, about a boy called Jojo.  He lives alone with his dad and one day he finds a jackdaw bird.  At the start, the film focuses mainly on the boy and the bird.  This part feels quite long and is kind of slow moving.  But the film gets more interesting when Jojo makes friends with a girl who has started to play on his waterpolo team.  (She always chews blue bubblegum).  Jojo’s father doesn’t want to have a bird living in his house so Jojo hides the bird from him.  His father finds the bird and tries to get rid of him.  Meanwhile, he is really longing for his mother.

The background music is nearly all country style and it sets the mood for the film.

I really enjoyed Kauwboy but it was quite serious and I would recommend it for the older age group (9-10+).

Kauwboy is a drama about a boy called Jojo who’s 10 years old.  He caught a bird that fell out of a nest.  His Dad won’t let him keep it.  Parts of the movie would make you laugh but they’re not supposed to.  Kauwboy is for grownups too.

Kauwboy is an emotional and very sad film about a troubled boy who finds a baby jackdaw and raises it as his only friend besides a girl from his water-polo team.  When his dad finds out about the bird, he quickly makes the boy throw it out.  The boy tells his dad he has thrown it away but secretly keeps it.  Watch the film to find out how the plot unfolds and if the boy ends up keeping it.  I would advise this movie to ages ten +.